It’s been quite an eventful 18 months for retail. COVID has decimated physical shopping, while online sales exploded as people shifted their spending from services and experiences back to goods. e-Commerce grew massively in every European country except Norway[1], with Greece and Moldova seeing significant upticks in online shopping. 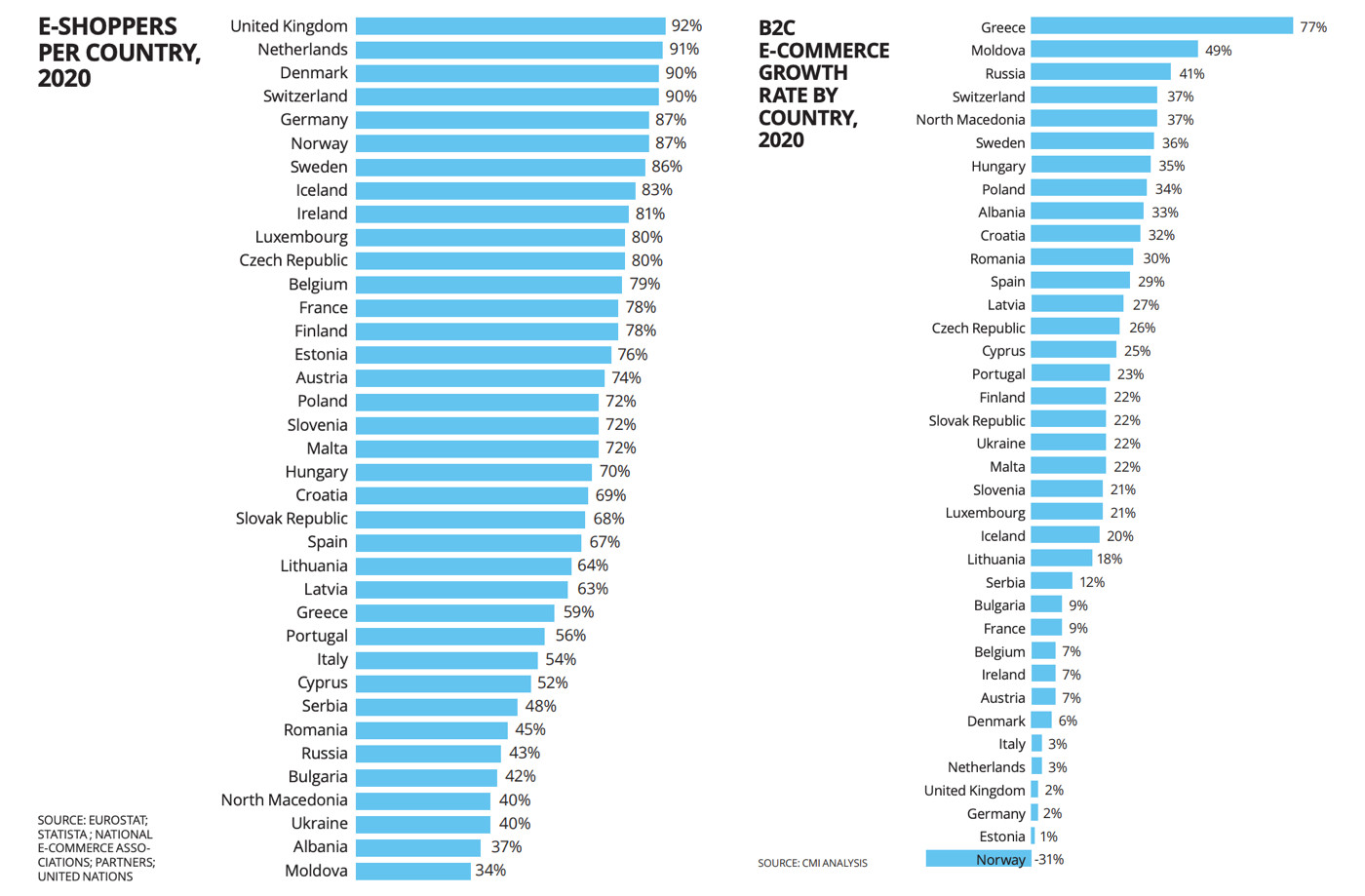 As lockdowns lifted, demand increased further, reversing a 5.7% drop in sales in 2020 to a projected 7.2% increase in 2021.[ii] This has caused chaos for manufacturers who found that ramping their supply chains back up was problematic. To compound the issue, a series of supply shocks rocked the fragile supply chains, ranging from the Ever-Given container ship blockage in the Suez Canal through to the global delivery driver shortage that has also caused gridlock at major ports and crippled the supply of goods into retail stores. Now rising inflation is hitting prices, meaning that shoppers are finding goods to be both scarce and expensive.

2021 also saw several new retail developments, some of which were reactions to these events, while others were disruptive innovations designed to reimagine the shopper experience.

To cater for a more static and home-bound consumer base, dark stores have emerged that support app-based on-demand grocery delivery services offered by start-ups such as Gorillas and Weezy. Dark stores are hyper-localised, micro-fulfilment centres in urban spaces that allow human pickers and delivery agents to fulfil online orders in under 30 minutes. However, the reliance on physical human labour also means that their prices are high and margins thin. Larger grocers are also embracing dark stores, dedicating personnel to online picking and delivery in their superstores and converting smaller units into online-only distribution centres. Walmart now employs more than 25,000 personal shoppers, and they must undergo a 3-week training program to learn how to select the freshest produce and the best cuts of meat for online customers. Walmart has also extended its online delivery hours to 10 pm, allowing customers to place online orders up to 6 pm and receive them the same day. But it’s not just groceries that are being delivered at speed - Walmart’s same-day offering now includes over-size items such as TVs and bicycles, leaving no excuse for a late birthday present.[iii]

If you look at 2021 from a perspective of ‘what did Amazon do?’, you cannot help but obtain a good idea of the future for retail in the coming years.

The first significant development has been Amazon’s move into bricks and mortar stores and its introduction of their ‘just walk out’ technology that allows consumers to avoid the most inconvenient aspect of the shopping experience – the bit at the end. In March, Amazon opened its first non-US ‘just walk out’ cashier-less Amazon Fresh store in Ealing, London[iv], and five more stores have opened in the UK since then. The technology has also been upscaled to hyper-market size, incorporating shopping trolleys with sensors that record what you place in them.

The creation of a cashier-less store has driven other grocery retailers to rapidly follow suit. In the UK, Tesco launched its first GetGo store in London in October, while over in mainland Europe, Albert Heijn has experimented with its ‘Tap-and-Go’ cashier-less store concept and joined forces with BP to open automated ‘To Go’ stores at BP retail sites across the Netherlands.[v]

In August, Amazon announced that it was opening department-store size versions of their Amazon 4-star stores. These stores will sell around 2000 of their most popular online items that have been awarded at least 4 stars by customers. The stores also operate as a fulfilment centre that services online deliveries, as well as a collection or return hub for goods that customers have bought online. The first European 4-star store opened in the UK in October.[vi]

This year also saw Amazon launch Amazon One, a palm-based biometric payment service that allows shoppers to pay for goods using their hands. This payment system is now in operation in 80 stores, including numerous Whole Foods locations. Combined with the ‘just-walk-out’ technology, this means that an Amazon Prime member who has subscribed to Amazon One can walk into any Amazon store and buy whatever they want with just the wave of their hand. 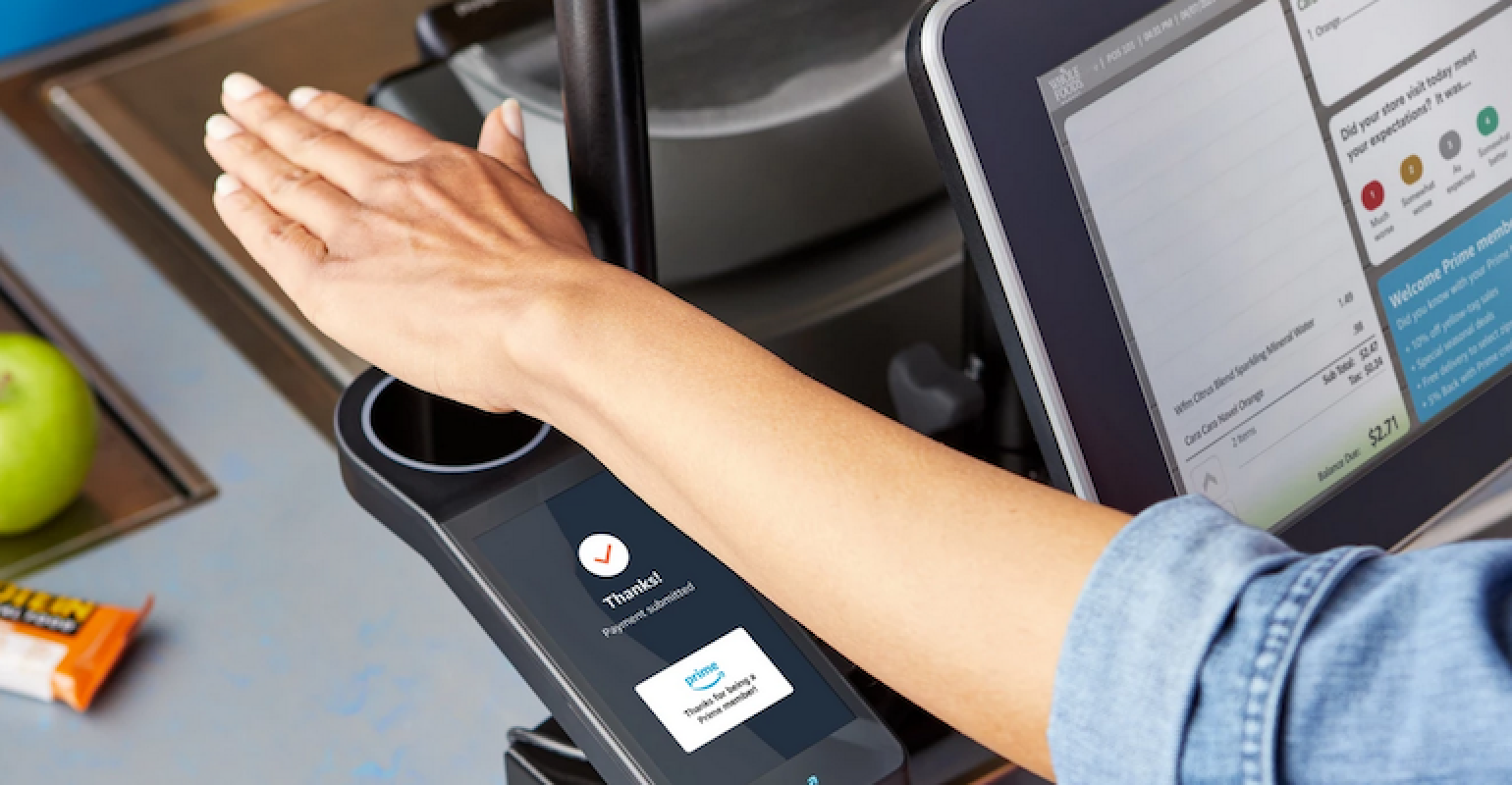 These developments represent Amazon’s continued desire to create a recognisable, seamless and frictionless shopping experience for its customers.

2022 will be a pivotal year for retail as we move into a post-COVID world.

Hyper-localised, dark stores will continue to grow as larger grocers adopt this concept and use their buying power and economies of scale to undercut the newer entrants. Dark store automation and algorithmic local inventory optimisation will become critical to ensure that the goods are available and delivered within the promised time. Retailers will rely on machine learning to model the complexities of demand variation, use shelf-scanning technologies to spot empty shelves and misplaced items, and automated warehouse solutions will be used to speed up the picking process.

Physical retail will make a comeback, but the stores will be increasingly populated with sensors and cameras to capture consumer engagement, monitor shelf availability, and generally capture data about every aspect of the store and the customers who shop there. Casher-less, contactless shopping experiences will grow significantly, with multiple food stores retrofitting their spaces to enable the ‘just-walk-out’ experience.

The items in these stores will also become increasingly localised due to the amount of online and offline data that retailers are able to capture about consumers and where they live. Powerful ML algorithms will be used to understand the buying behaviour of people in that region and predict which goods will be popular rather than simply provide a standard portfolio. Combined with the use of 5G beacons, this data enables retailers to offer more personalised and contextual experiences and promotions, offering incentives to shoppers when they approach a store.

We will also see more stores operating as micro-fulfilment centres to service online deliveries, returns and click-and-collect orders. This increasing level of backroom automation and technological support will enable the human staff to focus their time and efforts on providing a more personal shopping experience to shoppers in the store.

Road robots such as Starship’s delivery robots will start to become a familiar sight on pavements across cities in Western Europe. In October, Starship announced that their robots had completed 2 million deliveries, as well as partnering with British grocer Co-Op to deliver goods to customers across the UK.

Biometric payment systems will also expand in Western European stores but expect low adoption in Eastern Europe, where the public are naturally cautious about giving away personal data. However, the implementation of global digital vaccine passports will accelerate the adoption of biometric payment, as people become accustomed to sacrificing their privacy for convenience.

Blockchain will make an entrance, with barcodes online and offline that link to certificates that prove that goods were produced ethically and sustainably, including the amount of Co2 emissions involved in its supply chain.

Finally, as natural language processing (NLP) continues to become ever more sophisticated, expect to see the increased use of voice as a means of communication between the retailer and the consumer.

The aim of these developments is to eliminate as many consumer barriers and inconveniences as possible while also merging the shopper’s digital and physical identity into one single customer profile. This moves the consumer from a faceless member of a generic group to where retailers effectively have a digital twin of each customer on their system. This allows retailers to offer an increasingly personalised shopping experience, whatever the channel.

P3 Logistic Parks strengthens position in Central and Mediterranean corridor with the acquisition of a 112,000 m² Spanish logistics portfolio for ~€108 million